On to Summer Lake and Hole in the Ground

Coldest night thus far; down to around 0º F; toastie in my sleeping bags, however.  Because I was going to be driving soon, I wore my Sorel boots, but because I remained sedentary during my breakfast, my toes felt the cold; Sorels are best when active, and soon warmed up when I walked around taking photographs.  I retraced my path back down the Chewaukan River to Paisley, stopping to take photographs, inspecting tracks in the snow, and observing the odd bit of wildlife now and again; 2 deer, a startled coyote who dashed off up the slope with his very bushy tale waving behind, and several hawks.  I took care on the road as it was covered in old snow compacted to ice, and I made it down past the snow line without incident. 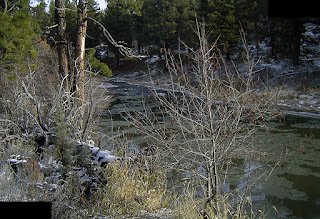 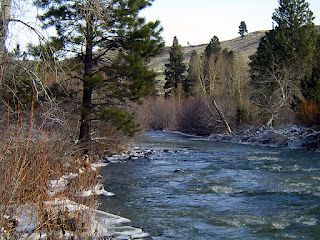 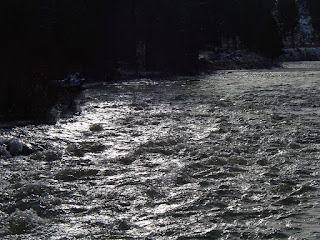 I slowly drove around Paisley, before heading north on Hwy 31 to Summer Lake, with Winter Ridge looming 3000’ above along its entire western side.  Winter Ridge or Rim is another one of these fault escarpments that are to be found in this part of the Oregon High Desert.  These to features were named by the Fremont Expedition in the 1840’s.  The exploration party was struggling through along the heights of Winter Rim, when they came to the edge and saw the lake below, snow free.  I expect the names came readily to mind.  I drove about a mile up a forest road to an overlook at the south end of the lake and had lunch, and studied the vista, from Winter Rim to my left around the basin of Summer Lake and to the hills east of the lake, which included Diablo Peak, which I now saw from a different direction than seen during my lunch stop on the previous day. 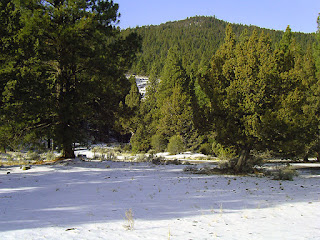 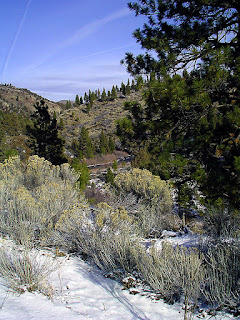 After this I slowly drove up the western side of Summer Lake and stopped at the Nature Reserve for a few minutes.  The circular drive was closed, but you were allowed to drive into the reserve on a day pass, and it probably would have been OK to spend the night in one of the campgrounds there.  Mostly it was duck hunters going into the reserve at this time of the year.  I filed away this information for future reference, and proceeded on my way.

I climbed out of the Summer Lake basin, passing Silver Lake (dry lake bed at present), and eventually passed the road to Fort Rock and Christmas Valley.  I checked out the entrance to several forest roads, but they were all closed from December 1st – March 31st to give the area’s wildlife a bit of a respite.  Eventually I found that the road to Hole-in-the-Ground (yes an actual place-name) was open, although snow covered, and I proceeded up about half a mile to spend the night in a clearing found there.  Hole in the Ground is a volcanic maar, about a mile across.  I camped there back in 2010 on Easter weekend.  Coyote deer and elk tracks in abundance in the clearing.  Tomorrow I shall see if I can squeeze out one last painting before heading back to civilization, just before the New Year. 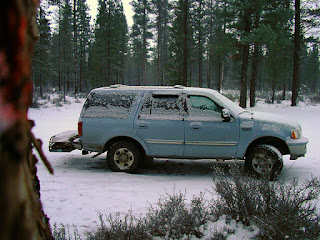 Campsite on the Road to Hole-in-the-Ground