On to Paisley & the Chewaukan River

The day after Christmas; Boxing Day in England; and overcast, as it had been all night, and I headed out as I thought I needed to be back in civilization by the 30th; wrongly as it turned out, and most unfortunate as I could have squeezed out a few more days in the wild to include the New Year.  Be that as it may I left the CCC Hut Campground, home for the past few days and part of the Hart Mountain National Antelope Refuge, and slowly crossed Warner Valley on a county road, between the dry lakes, stopping to take photographs now and then, and to study the map and identify distant features, eventually meeting the Hogback Road at a T-junction. 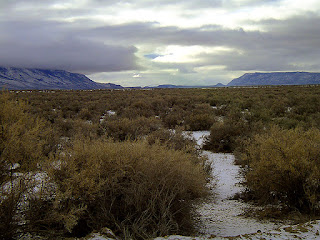 Here one may turn south for Plush or north for Hwy 395, twenty miles away.  I turned for Hwy 395, and proceeded up between the Coyote Hills, to the south and on my left, and the Rabbit Hills north and on my right, seeing them close to, after having studied them from afar all week.  Seen from this road there are rocky buttes that rear up from the northern aspect of the Coyote Hills that look like they should be called the Coyote’s Teeth; whether they are or not, I do not know, but they should be.  A couple of miles before the junction with Hwy 395, there is a good view of Juniper Mountain and the northern extension of the Abert Rim; this latter is a fault escarpment, with its rim facing west and the plateau sloping east towards the now distant Coyote & Rabbit Hills, and the Warner Valley beyond. 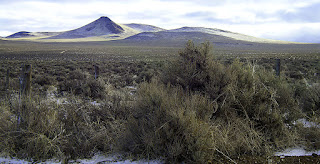 From here I drove north for four miles to check out a rest area for future reference.  It had water pumps there, similar to the one at the CCC Hut Campground, but whether they were turned off for the Winter or just frozen, I do not know.  I retraced my path past the Hogback Road and dropped down towards Lake Abert, but before arriving I turned right onto another county road that would eventually take me to Paisley on Hwy 31.  If the road became to iffy, I could always come back to Hwy 395, but as a county road, I thought it would be OK; I wouldn’t take chances after my experience of the Mudfest of several weeks before; it was not as good a road as the Hogback Road, but was no real problem, partly because it was frozen for the first two-thirds of the drive, when I stopped to have lunch at a view north past the east edge of Wildcat Mountain, and Diablo Peak just poking its head up beyond, and with St. Patricks and Sheepshead Mountains a bit to their right.   It was turning out to be a photo-recon day; these days are too short to drive very far, stopping to take photos, and expect to get a painting in as well.

Lake Abert & the Abert Rim
(the latter on the left) 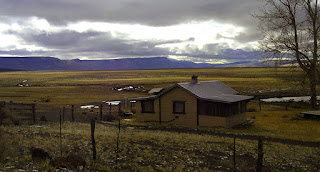 Abert Lake Homestead with the Abert Rim beyond 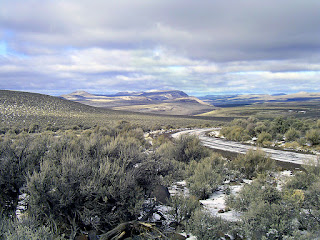 Wildcat Mountain
(with Diablo Peak just poking up beyond
and with St. Patrick's and Sheepshead Mountains a bit to their right;
here I had lunch)

Paisley, named after the town in Scotland, looks to be a pleasant village (hot in Summer, I expect), about the size of Lake Nebagamon, in northern Wisconsin, where I spent my first three years of grade school.  I topped up with petrol, and decided to check out the Chewaukan River, which flows through town.  I meandered up the river valley (county road 33), taking photos, and eventually decided to turn around about 10 miles up, the now icy and snowy road.  A few hundred yards back down the road I decided to spend the night at the Jones Crossing Campground, which although officially closed, was only closed as far as amenities were concerned.  Many tracks in the 3” of snow covering the ground … deer, coyotes, and what may have been cougar tracks; these latter were along the road where I had turned around.  I kept my bear spray canister close to hand while strolling around and preparing supper.  Studying the map I see that I’m now about 30, maybe 40, miles from the site of the now infamous Mudfest, but over some desperate and snowy roads, over the escarpment and mountains. 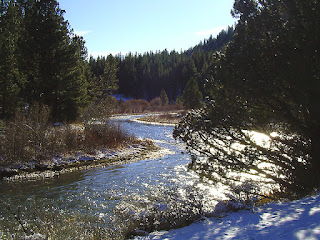 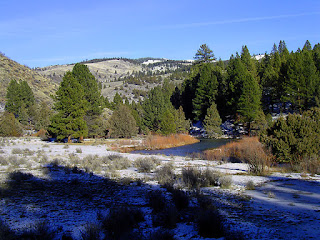