Stars were bright all night with just the occasional cloud passing by; I awaken several times during an average night; always have.  And the morning came bright and fair, and the best day since I left for the High Desert more than a month ago.  Christmas being two days off and my supplies needing a top up, I headed for Lakeview, 60 miles off.  I would have liked to have painted on a day like this, but I didn’t want to go to town on Christmas Eve, as I have no idea what the business hours might be.  I discovered that the water pump at the campground actually was working, and so I filled my containers; later I also discovered that it depended on the temperature whether water actually came out or not, but it was interesting to know, that it didn’t seem to be closed off during the Winter.

I drove through Plush, 15 miles from the CCC Campground, and which has only a small general store, stopped to take some photos of an old green barn, which I intend to paint at some point. 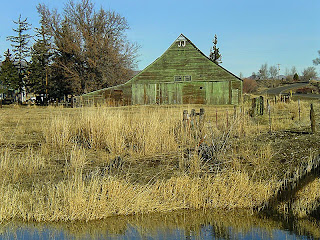 I continued on up out of the Warner Valley, via the Plush Cutoff Road, and with Drake Peak, to the southwest as a landmark, I enjoyed the drive along the rolling terrain of the plateau.  A few miles along I noticed a large herd of cattle, about two hundred, far off to the west that had not been there two weeks earlier; they looked odd, so I pulled over and glassed them with my binoculars, and lo and behold they turned into ANTELOPE!  Here I have been in the Hart Mountain National Antelope Refuge for almost two weeks, and not one sighting of an antelope, and here they are across the valley!  Sadly, they were two far for decent photographs.  I stopped again just before joining Hwy 140 to take some more photos of Drake Peak (altitude 8407’); this is part of the Warner Mountains.

I liked the look of Lakeview, (population 2294; 2010 census); it’s an oasis of trees and houses in the High Desert.  First I had lunch at the Burger Queen; I felt like having a cheeseburger at a local one-off café, for a change.  Next I visited my bank and as I was strolling through the doors, I noticed across the street a tiny home-like building with a sign saying, “Town Hall.”  I enquired of the teller, if that was actually the Town Hall across the street, and upon receiving a yes, I paused for a few seconds, searching for words, and said, “How sweet!”  Well … it was; what else need be said?  Chuckling to myself and exiting to the street, I looked at the sweet Town Hall again, and proceeded to the Safeway, the only food store in town that I was aware of.  Then after topping up my stores, I drove around the town a bit; I was surprised at the variety of and number of shops there were; perhaps I shouldn’t have been as it is a long ways to anywhere else.  I tanked up on petrol, gave my Mom a call, wishing her a Merry Christmas, and headed back to the wilds.  I hoped to find a road into the mountains that wasn’t too snowy, and find a clearing among the pines to spend Christmas, but even though I found one that might have been OK, and after driving a short way along it, I decided not to risk it … snow, and the memory of my recent mudfest of a few weeks ago, militated for caution.

In the end I returned to the CCC Hut Campground, sighting no antelope on the way, but a herd of deer with one stag, as I dropped down into Plush, and another herd as I entered the campground, also with one buck.  I Mountain Bluebird was gracing the fence as I pulled into my campsite; they are a beautiful blue, these birds … a bit of sky come to Earth.  I took a few photos of the last sun on the Hart Mountain Ridge (both of these below are from my campsite). 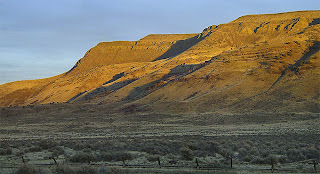 There were some cloud layers to the southwest as the sun set, and as I prepared supper, I thought I glimpsed Venus low above the horizon.  This was confirmed later, when I brought up my Astronomy App on my tablet … so, Venus will now be an Evening Star for the next few months.  My tent neighbors of the night before had gone up the mountain this morning, so I again had the camp to myself.  I watched the thin crescent Moon until it set at 18:43, read a bit and turned in for the night, hoping the morrow would be as nice as this day had been.
Posted by Not Quite a Painting a Day at 14:00