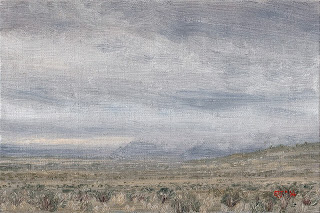 Although there were intermittent stars during the night, by 06:15, when I arose, it was overcast and a light rain.  Coyotes yipped and yowled to the northwest, just as they did as I prepared supper the previous evening … towards the Rabbit Hill, no less; the Coyote Hills are the massif to the south from the Rabbits.  As I ate breakfast I was taken by the peach coloured strip of sky low along the horizon to the left of Poker Jim Ridge, and glowing through the soft desert rain … perhaps a promise of clearing; it was essentially the same view as painted two days before (seen here), but a different kind of rain.  Breakfast finished I did a rapid Oil Sketch using a big brush to quickly jot down the impression, as witnessed by the brushstrokes; it’s always interesting to see how much one can do with a large brush in good condition.  I used about a #6 bristle bright, for the whole thing, save for my monogram; one learns to judiciously use the corners for the smaller details.  I am learning that one goes through Oil brushes at a much more rapid pace by far than with Watercolour brushes; brights* soon become ragged filberts*; Watercolour brushes, especially the larger ones, can last for decades, well taken care of.

After I had completed that sketch I had lunch, hoping that the day would improve and cast some interesting light over the landscape, so that I could perk up the sketch of the CCC hut published in the last post, but it was not to be; the rain did stop, but the overcast remained, so I continued on and completed that sketch, and dabbing in the deer as I mentioned in the last post.  Thus it remains more or less a reference study.

Even though I am still in (just) the Hart Mountain National Antelope Refuge, I have yet to see any antelope; coyotes, some birdlife and deer, but no antelope.  I wonder what is the best time of the year for their sighting.  A Great Horned Owl hooted off towards the mountain to the east, while I prepared supper, replacing the coyote choir of last night and the morning’s serenade.  I cooked at my campsite tonight as it was warm and calm, and stars appeared through various sucker holes to the southwest … over the Coyote Hills across the Warner Valley.  I have a tent neighbor several sites away, and almost a caravan neighbor in another, but after supper, the latter, left and headed up the mountain.  They could have a problem maneuvering the caravan in the snow at the Hot Springs campground, if that’s where they were headed, but perhaps they were instead passing through the antelope refuge, and heading for Steens Mountain.  Since Christmas is only two days away, tomorrow I shall go into Lakeview, the ‘tallest town in Oregon,’ to top up my supplies and my gas tank … oh, and my water supply as well!

No imprimatura was used, just the white of the Oil Priming, and the Pigments used were, Rublev Blue Ridge Yellow Ochre, and Winsor & Newton Cobalt Blue, Venetian Red & Cremnitz White.

* A bright is a short flat squarish brush, and a filbert is a flat brush with rounded corners, so the tip is rather oval in shape.
Posted by Not Quite a Painting a Day at 12:30