I was going to post on my blog while crossing Nevada, but the library I tried had no Wi-Fi!!!  Well ... it is the loneliest road in the USA, they say. 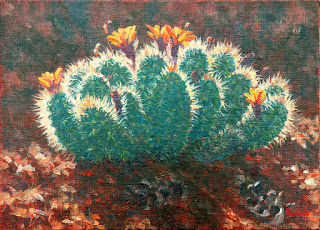 There was lots of Cactus around my campsite below Eagle Crags, mostly prickly pear, but also this specimen in much fewer numbers.  Some of these blooms came in before those of the Prickly Pear.

My evening dinner associate, the little lizard, had been missing for the previous two evenings, but one appeared on my last evening in this camp, but on a different rock slightly further away.  This one looked thinner with folds of skin, whereas my usual dinner guest was fatter.  Still, this one had the little purple spot in the same place, and watched me in the same way, and wasn't at all skittish.  I believe she, yes she, had been fat and gravid, and then gone off to lay her eggs, during the time she had been missing.  I had noticed that she seemed fatter than the other more skittish lizards, and had wondered whether she was in fact a she, and gravid as well … pretty sure this is the scenario.  I wished her and her offspring well, on this my last evening, as she disappeared into the darkening twilight.

My last morning at my lovely campsite below Eagle Crags, I left early to make sure I got a parking spot at the Zion Visitors Center.  I wanted a last taste of Zion, so I boarded the shuttle bus to the Weeping Rock, and headed up the trail towards the Hidden Canyon.  I wanted to get some photos from higher up on the canyon wall, since I had so many from the Canyon floor.  How far I went would be decided on the trail.  After a number of ascending switchback, I fell in with two ladies and a bloke from New Jersey, Dana, Yolanda and Rob.  It was a good thing that I did so, since I would have deemed that I had enough higher altitude photos and so begun my descent, much earlier than I did.  That would have meant missing the trail sliding into a slot canyon, and the beauty to be seen there … so thanks, Dana, for introducing me to that part of the trail! 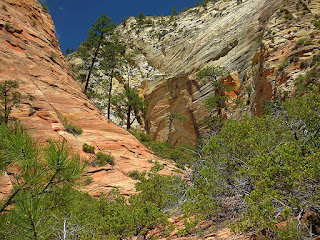 Shortly after 14:00, I retrieved my car and headed towards the East Entrance road.  Just past the 1.1 mile long tunnel I parked in the small car park and took the half mile long trail to the Canyon Overlook, above Zion Arch.  Along the trail the interbedded layers of the Navajo Sandstone show off their sand dune origins at their best; one can readily visualize those dune fields of long ago.  The views over the Canyon are stunning as well, and worth the effort. 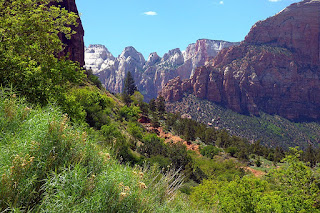 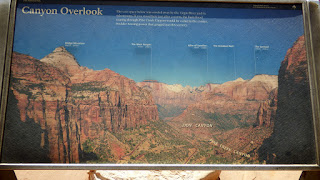 It was later in the day than I had planned, when I left Zion National Park, after topping up my water supply at the visitors center, and passed through the town of Springdale, but I had said my goodbyes to my Eagle Crags campsite, so I travelled west only about ten miles, to Dalton Wash Road, turned north onto it and after 4.2 miles came to a dispersed camping area, I had wondered about. The road in is comparatively good, a bit wash-boardy in spots, but the last bit gets pretty steep and so I threw her into 4-wheel drive for that bit.  Once the mesa top was reached, I found I was immediately in the camping area, and no one was in the area.  That didn't last long, but long enough for me to get my choice of the dispersed sites, and then one of those Cruise America camper trucks (I heard it grinding up the hill), crested the mesa top and took a site about a hundred yards away.  I had a great view of the west side of the southern part of Zion Cliffs, with the West Temple topping all, as I ate supper, and the light of the setting Sun cast its glowing light on all.  In the morning I found a new cactus, which I can only describe as a cactus bush (see photos).

Before going on my last Zion hikes of the day before, I had enquired about Cedar Breaks National Monument, which I had passed on my way to Zion, from Bryce Canyon National Park.  To my surprise it was still closed and was, in fact, expecting snow showers!  I mulled that over as I gazed at the clear blue skies overhead and thinking of Cedar Breaks less than fifty miles north, as the crow flies … funny old country around here.  Thus here I was heading into Hurricane to resupply before retracing my path of a month ago to Cedar City, instead of leaving Zion by the East Entrance and visiting Cedar Breaks … perhaps another time, should I ever get down here again.

The Wal-Mart in Hurricane was out of camping propane, so I popped into the one at Cedar City, and petrol-ed up at Smith’s, where I get a 3-cent per gallon discount.  I perused my maps and discovered that the route northwest of Cedar City, that I had considered, was an unpaved road, so I headed north on State Hwy 130, intending to pick up Hwy 21 west at Minersville, but a few miles north I reconsidered, thinking that those unpaved roads can be pretty good sometimes, especially if they serve a dispersed populous.  So I took a connecting road (unpaved), over to the unpaved Lund Highway … interesting designation for an unpaved road.  It was as good as I had hoped and so I crossed the Escalante Desert, spotting the odd Pronghorn, and not seeing another vehicle for an out 40 miles.  The I spotted a cloud of dust on a connecting road.  They must not have seen my cloud of dust, for when just after the intersection of the roads as I rounded a bend there was a pickup truck stopped by the side of the road, with its passengers lined up pissing beneath a tree.  I waved and proceeded on, leaving them to muse on what the chances were that, without seeing another vehicle for however many miles, one should happen by just when they decided to take a whiz!  That was the only one of two vehicles I saw in 80 some miles, until I joined State Hwy 21 the next day.

A few miles farther on from the whizzing truckers, I turned onto Jackson Wash Road and found a quiet camp for the night below the tops of the Indian Peaks Range (on my map, but also called the Needles Range in a geology book I have).  The surface soil here is particularly granular, with not a lot growing on it, but Junipers and Pinyons.  After referring to my Geology tomes, I decided that it was made up of volcanic tuffs probably from the nearby Needles Range, not far to the west; I expect this tuff gets tough during wet weather (har, har!).
I remained in camp the next day until 14:00, topping up my AGM battery with my suitcase solar array, and self inflicting a haircut … it had been six weeks, already, since my last one on Buckskin Mountain, the day before I entered Cottonwood Wash!  Grooming done, I leisurely drove north down the Pine Valley, with the Needles Range to the west, and the Wah Wah Mountains to the east.  I joined the pavement of State Hwy 21 and about 30 miles farther on crossed from Utah into Nevada, and then entered Great Basin National Park, where I took a spot in the Baker Creek Campground, next to a babbling brook.

It's interesting how the temperatures can vary in just a few miles and a bit of a difference in altitude.  When I re-supplied in Hurricane it was getting to be an onerously hot day, but thirty something miles north at Cedar City, and a couple thousand feet higher, it was a very pleasant day, and now I’m at just over 7000', and it is quite cool in the evening, especially after the Sun dips below the crest of the mountains.  They had snow here a couple of days ago, probably the same snow that was supposed to hit Cedar Breaks National Monument.
Posted by Not Quite a Painting a Day at 17:08