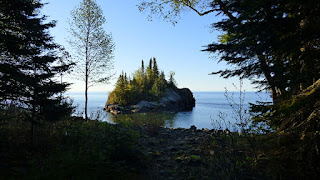 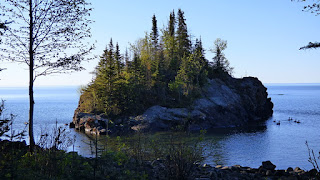 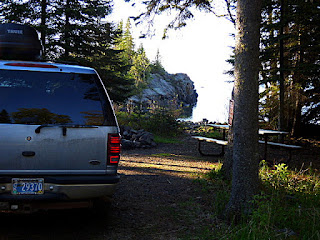 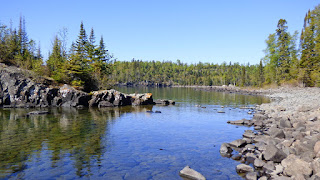 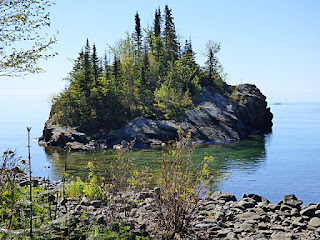 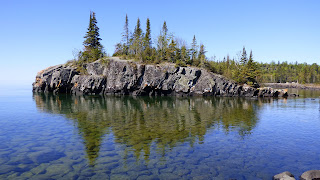 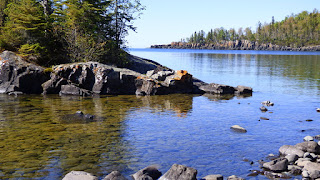 Awake and up at 05:40, some photo-recon along the shore both before and after breakfast.  Since I am where I am, just past Hoveland, I headed off to see the closest falls, at the Judge C. R. Magney State Park, which was six miles back down the road along Lake Superior towards Grand Marais.  This entails a walk of about a mile through the woods high above the Brule River (the Minnesota Brule, not the Wisconsin one), passing by the Upper Falls on the way.  It's quite a trek, because of the 175 stairs going down to the Upper Falls, which of course you have to climb back up on the return journey.  And of course once you have gone that far, you have to climb again to get to see the Devil's Kettle 700 feet beyond (Oregon does not have a monopoly on the Devil's property ... see, here is his kettle!). The Upper Falls is wonderful enough, but the Devil's Kettle is a special falls and in a class of its own.  The falls here splits into two parts; one over the edge like a normal cascade, and the other into a hole, with no seeming egress of the water ... thus the Devil's Kettle.  In these photos, it is hard to see the dual nature of this falls, because of the great amount of Springtime/early Summer run-off.; all the waterfalls are flowing more full than I have ever seen them.  Previously, I have only been here in the height of the Summer, or in the Autumn, when the flow is lower.  Under those conditions the Devil's Kettle is more readily apparent.

Once I had negotiated the 175 steps of the return journey, I took the side trail that leads along a hogback spur ridge to the Lower Falls.  This is a true primitive trail, very infrequently used.  Once there was a sign at the trail junction, informing people of the existence of the Lower Falls.  I always have saved this Falls for the return journey.  It is not a large falls compared to the previous two on this trek, but I always enjoy the solitude of it ... I have never met anyone on this trail or at the falls itself.  I was thinking of a sketchbook drawing of this falls, but the Sun was beating down, and it was getting late.  Most visitors are in a rush to get to the various falls, but it pays to take one's time on this walk through the woods, to enjoy and experience the Northwoods.  A lot presents itself, if one takes time to notice; various flowers whom I don`t know who they are, but others whom I do and are old friends; bits of the forest floor, and which I find especially fetching; odd stumps and fallen trees that I find interesting.  All these bits that make up the Northwoods ... the Northwoods of my childhood of Upper Michigan, Wisconsin and Minnesota.  I drink this all in before I begin my trek West, and the very different forests out there.


This slow nostalgic stroll to the falls and back took longer than originally planned, so deciding that it was too late to visit Grand Portage today, I thought I might go back to the Lake Superior Horseshoe Bay campsite, and maybe do a drawing of the small islet, but sadly someone else had nabbed the site.  So I put my backup plan in motion and headed up the Arrowhead Trail and a small campground at Esther Lake.  There were said to be five sites there, but I found only three, and both the waterside sites were occupied.  This left me the bijou buggie site, but with a bit of repellent applied to exposed areas, and lighting a couple of mosquito sticks during supper preparations,  and that was sufficient to keep the pesky little buggers at bay.  After supper I strolled down to a point in the lake.  The Sun had just gone down and the evening breeze was sufficient to ripple the water enough to make sparkles on the water from the light of the waxing gibbous Moon ... another fine day Up North.


On the Forest walk to and from the various Falls on the Brule. 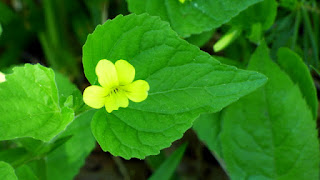 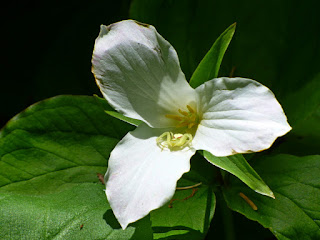 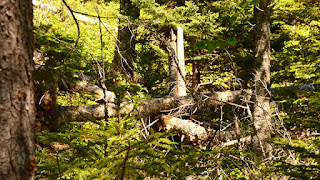 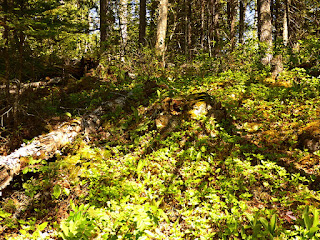