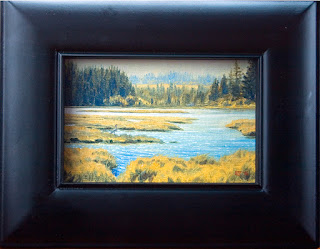 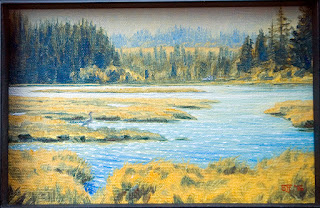 It has taken me awhile to get back into the swing of things, as far as posting to my blog is concerned, and it will be a slow, but I hope fairly steady renaissance … as it were.  The Annual Coos Art Museum Maritime Show opened on the ninth of July, and I was in attendance for both the Artists’ Preview and the Private View the next evening.  I left town at 22:00 on the 3rd, and travelled down to one of my secret clearings in the forested Coast Range near Heceta Head, spending the night and leisurely proceeding on towards Coos Bay the next day.  I went up into the Coast Range NE of Coos Bay watched the 4th of July fireworks from 15 miles away, or at least those that shot high enough to be seen above the intervening hills … binoculars were de rigueur.  Always nice to see them from a distance, avoiding crowds and the noise; my own private display.  Found the forest road I camped on last year, and on which I painted the work seen here, which is now in the Earthworks Gallery, in Yachats, Oregon.  The next day I toddled on down to the Museum and delivered my two small works for the coming show, topped off my supplies, petrol, etc. and did a bit of recon on the way back to my chosen Forest Road campsite.  After a leisurely supper, and a bit of star gazing, it was off to bed; sooooo nice to be back in the Wild.

Up bright and early the next morning, I fully intended to get the above painting done for Saturday’s Auction in support of the Museum, but the beauty of the Wild intervened and I spent most of the day just watching unfold around me and … enfold me.  After the months spent in a windowless studio completing the commission, mentioned recently, I needed to just drink in silence.  As I arose that first morning the valleys, below the ridge on which I was camped, were filled with mist … I was above a sea of fog … a view I have wanted to see for ages.  Between recon photos and observations, I breakfasted, and by the time I finished my morning coffee most of the mists had cleared from the valleys, only hanging on for awhile in those closer to the coast.  And then it was watching the birdlife, the occasional rabbit, the resident chipmunks, and Bambi and his/her Mom grazed down the road, much as a previous generation had last year.

Late in the day I finally dug out the paint box, studied the pencil drawing I had done the previous afternoon on my way back from delivery, laid down an imprimatura on the canvas panel and applied the brush drawing.  I let this dry overnight and the next day set to it again, but with no real hurry, as my “Nature-watch” continued.  On the third day, I touched up a couple of places, and inserted the heron, and threw it into its frame, ready for the auction, completely forgetting to photograph it before doing so; thus the framed photos above.  Three days of beautiful clear skies, warm but not hot temperatures … the way I like it.  Ahhhhh!  Nice!

Oh yeah … and by the way … the above Oil of Haynes Inlet did sell at the auction.
Posted by Not Quite a Painting a Day at 18:33