Blown before the Approaching Storm 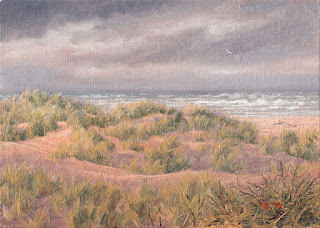 As indicated in my previous couple of postings, I did get down to the coast to deliver & pick up paintings to & from various galleries, and managed, in spite of the storms, to apply brush to panel, and pencil & chalk to several sketchbook leafs.  The first day upon arriving in the Bandon area I spent the day pottering about the Devil’s Kitchen (I told you the Devil had a lot of Oregon real estate), drawing in my sketchbook and taking reference photographs.  The next day I worked on the above image, glad to be painting on the spot again.  The weather reports were for rain and wind, and so it proved, as while working on this one the winds began to rise, and by evening the rain was coming in.  This is the way it was for the several days I was down on the coast.  Although I did not paint as much as I had planned, I was able to take advantage of the stormy conditions take a lot of reference photos of the Bandon coast with heavy seas pounding the cliffs and sea-stacks, dodging squalls and showers while doing so; all grist for future work.  I have a quantity of reference photos in my image library of this coast, but none with such heavy Autumn weather.  There were some sets of waves rolling in that were 20 feet high.  My estimate of wave heighth was derived as follows: standing on a low cliff about 15 feet above the water level, thus my eye level being about 5½ feet higher, thus totaling roughly 20 feet above the water level, any wave that breaks the line of the horizon (which is equivalent to your eye level), will be that high … namely about 20 feet.  If I had been standing on the shore with my toes in the water, those highest waves would have obliterated my view of the horizon line, and my estimates would have been guessed-imates, but of course the oncoming waves would have been impressive to see … and of course they were when I was down on near the waterline.  This one reason I do miss living on the Cornish Coast where I could experience the storms many times a Winter’s season.  I do not miss my automobiles rapidly rusting away, however.  I have been at China Creek before, but because there are no impressive rocks and sea-stacks for the waves to crash upon, as there are at most of the other parts of the Bandon beaches to the north of from here, I have not painted here before.  But this day the light on the dunes first grabbed my attention, and the deteriorating weather blowing the gulls around, as I painted, suggested the title for the sketch … I placed only one gull being blown before the approaching storm … I may add another, but perhaps not, as just the one should be enough to suggest a solitary walk on a windswept shore.

Taken after the Storm a couple of days later at China Creek. 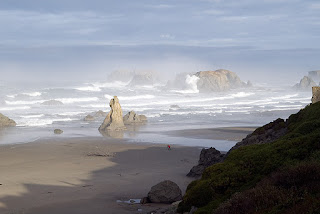 This was from the Face Rock overlook on the morning of my first day, when I went on to the Devil’s Kitchen to draw in my sketchbook. 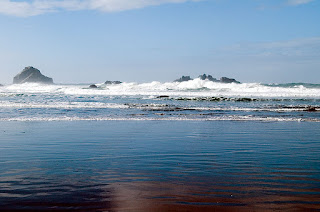 From the beach near Elephant Island with Face Rock on the left and the Cat & Kittens, just to the right of center, obscured by waves … this is not the angle to observe the face on Face Rock.  This was taken on my last day in Bandon … all too short a stay this time.