Footprints on the Snowy Road 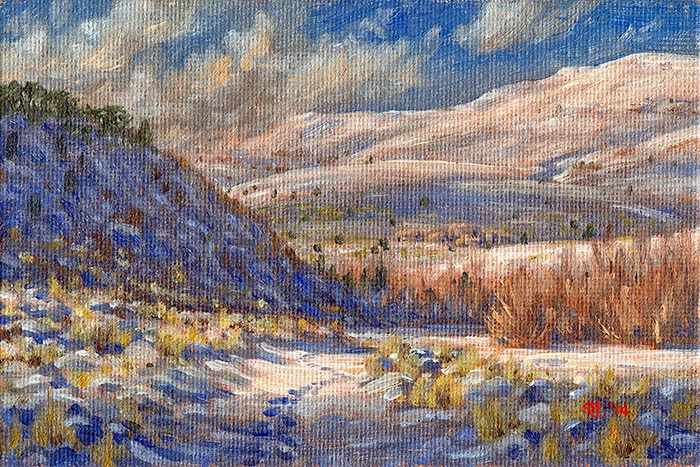 Less than a quarter inch of new snow fell overnight, and the Moon shone through thin cloud at times during the wee hours.  For the second day I did not leave the Hot Springs Valley, but remained to paint pretty much in the same spot, but turning 9o degrees left and painting towards the southwest and the second wing of the campground, nestled in the shadow of the left-hand hill, and with the Warner Peak of Hart Mountain beyond.  I pushed the blue of the sky and the shadows to give a greater contrast with the warm light on the snow in the morning light … maybe a bit too far, but we are at about 6500’ where the sky is darker, especially against the brightness of the snow, and it does serve to remind me of those contrast on that morning; and besides … that is part of what this is all about – taking notes in paint.  Painting thinly over the Imprimatura allowed the warmth of the Venetian Red to glow through the top layer of white of the snow, with thicker strokes of paint giving a bit of topographical sense to the terrain.  I put the footprints in later in the day after I had returned from a walk down the road.

There were myriad tracks of various critters; the coyote tracks seen in the snow on my first day were now mere depressions, due to the inch or more that that has fallen since then, but sometime during the night a small herd of deer had come from the left (past my campsite) and crossed the road in the above sketch, and if I had put them in would have appeared within the shadow area in the foreground; they would have been too confusing to have stuck them in; but I remember them, and maybe in a larger work.  There is so much life hidden away out in this High Desert landscape … besides the deer, antelope (I’ve yet to see any), and coyotes, there are plenty of rabbit tracks, and various rodents.  The latter seem to race from tuft to tuft of sage or grass, where there are many entryways into safety below the snow; I can visualize them down there, feasting on the different grasses and plants, visiting family, friends, or paramours, and with the occasional tussle with rivals; no doubt after one too many at their local mouse saloon; and later, rolling home when the pubs have closed, providing sustenance for the watchful owls, and wandering coyote; all this from a few tracks in the snow!

The Pigments used were:  Rublev Blue Ridge Yellow Ochre, Italian Burnt Sienna & Lead White #2, with Winsor & Newton Cobalt & Cerulean Blues and Venetian Red.
Posted by Not Quite a Painting a Day at 18:00